General Hospital (GH) spoilers reveal that Kirsten Storms is off the soap for a bit as her character Maxie Jones. The reason? The beautiful and talented actress is taking some time off to recover from a successful brain surgery. While the operation went smoothly, she still needs some rest and recuperation to get back to being her best self.
In the meantime the actress is keeping her fans updated on social media and we have the scoop for you right here!

Most of Kirsten Storms’ fans know that she is an ardent crocheter. In fact she and her former costar Emme Rylan (Lulu Spencer) have an online presence doling out tips and tricks for fans who also like to engage in a little yarn relaxation. 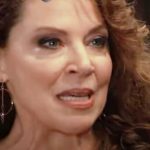 Storms recently shared a sweet crocheted tank top that she made for her daughter Harper who she shares with former GH star Brandon Barash (formerly Johnny Zacchara, currently Jake DiMera on Days of our Lives).
General Hospital spoilers: Kirsten Storms is Recovering From Brain Surgery

She posted a pic on Insta of daughter Harper modeling a mint green top crocheted from a pattern by designer Nadia Moule.

She captioned it, “I already said in another post, but [Moule’s] patterns are so much fun to make, and the garments are beautiful. Her patterns are on Etsy and Ravelry.”

She added, “And I know, Harper is growing up so fast.” 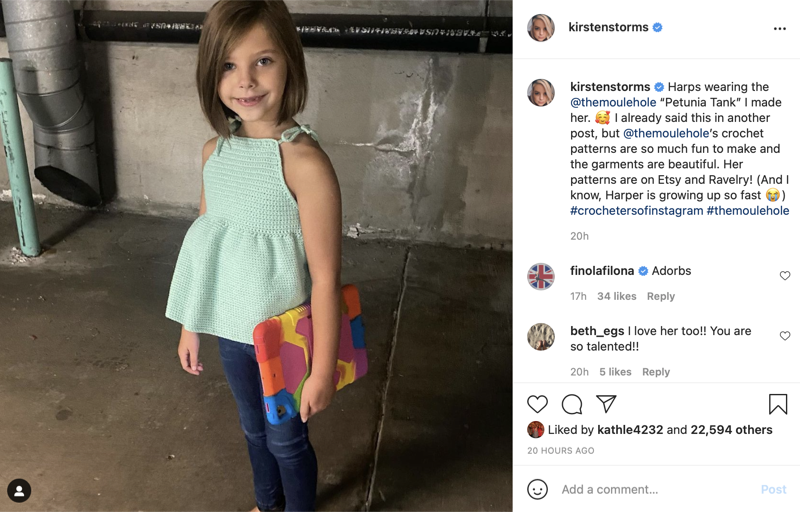 Those are words that Storms’ character Maxie could also be saying right now. On GH Maxie gave birth to a daughter she named Louise. But due to extenuating circumstances, she was forced to hand off her precious baby to Brook Lynn Quartermaine (Amanda Setton) for now.

This is to ensure that the baby daddy, Peter August, cannot get his evil hands on her. Peter is presumed dead by a handful of people, but Maxie did not know that when she left for Texas. She left to keep from blowing the lid off of her scheme as she was unable to keep visiting the baby, raising suspicions.

This week it was revealed that Peter could actually be alive, just as Maxie feared. When his supposed killer Hamilton Finn (Michael Easton) went to check on the body, it was gone! Where did the evildoer’s corpse go? Or did it get up and walk off of its own accord?