General Hospital (GH) spoilers show that Emme Rylan (Lulu Spencer) has been sharing her adventurous life with fans on social media and now she has some timely news to share about her kids.

Since her character was taken offscreen, the actress has spent time with her family traveling around the United States.

The actress told her Instagram followers that her family had decided to leave Los Angeles and drive around the country in what she described as a “COVID safe epic road trip.”

On her Instagram she posted a video about something that was once commonplace but went the way of the dinosaur. But guess what? it’s back!

She told fans, “Dropped off Dakota and Levi to school for the first time in one whole year. What do you hear? Silence in my car! Silence. Jackson is still home. His class starts next week. The last year has just been so unimaginable. I can’t even believe I got to pack a lunch.” That sounds like a very parent! 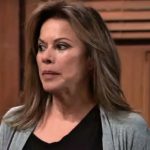 Emme went on to say that, “I got up early, I made them fresh food; a nice delicious home-cooked lunch.”

Costar and bestie Kirsten Storms (Maxie Jones) went on social media to say that Rylan called her, “with so much joy… and no shame” about the back to school adventure and was happy her friend could, “enjoy some me time.”

Other GH stars including Finola Hughes (Anna Devane) told Rylan they also were happy for her.

Lulu has been out of sight for a while now. She is not in Port Charles, rather the character was placed into a long-term health facility after being wounded in an explosion.

So when will sweet Lulu wake up and come back to Port Charles and her ex-husband, Dante Falconeri (Dominic Zamprogna)? General Hospital fans are hoping it’s just a matter of time before Lante reunite. Or at the very least that Lulu comes home.

It seemed odd that Lulu left just as Dante returned from a long absence. But maybe the show is setting up Dante to be in another relationship with someone before Lulu returns? He has been talking to Sam McCall (Kelly Monaco) an awful lot lately and fans are chattering about a hook up between the law abider and the law breaker.

General Hospital (GH) Spoilers: Peter’s Confession To Franco – What Will Happen With The Recording?