ABC General Hospital spoilers reveal that Inga Cadranel’s character Harmony Miller has checked out of Port Charles, NY, and with her exit she has taken a lot of intrigue and mystery with her. Will the once devoted cult figure and mom of Willow Tait (Katelyn MacMullen) be back?

Canada native Inga has starred in a number of Canadian television shows including The Eleventh Hour, Jeff Ltd., Rent-a-Goalie, and The Bridge, Lost Girl, Orphan Black, and The Strain.

We have the skinny for you on this character right here!

Inga Cadranel debuted on General Hospital last year and she was a hardcore vixen up to no good. By the time of her exit, she was semi-rehabbed although lots of questions hung in the air over her motives and reliability.

Fans were gobsmacked to learn that the wicked woman was sweet-as-pie Willow’s mother. It appeared that they had made up for all the harm Harmony caused her daughter, but the last we saw of Harmony she was back in bed with the devil, this time Cyrus Renault (Jeff Kober).

Thank you Thank you @generalhospitalabc !! I love everyone involved in this show to bits and pieces . I am forever grateful to the producers , actors and fans for making me feel so welcome . I wish times were different and Covid wasn’t a factor in the landscape right now but shooting in Canada and going to LA to then continue shooting here with quarantine timing and my children we just couldn’t make the schedule work. I will treasure my time on #generalhospital forever ….and you never ever know what the future may bring 💞. @entinifrank3c12 @katey_macmullen @briananicoleee @1steveburton

It was curious that fans did not see her more present in Willow’s life during the custody battle for baby Wiley but perhaps the writing was on the wall that Harmony’s tenure in Port Chuck was over and out.

We last saw the character in August and Inga confirmed her GH exit on Instagram by saying, “I wish times were different and [the current health crisis] wasn’t a factor in the landscape right now but shooting in Canada and going to LA to then continue shooting here with quarantine timing and my children we just couldn’t make the schedule work.” 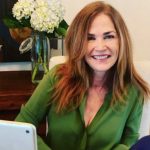 Inga added, “I will treasure my time on #generalhospital forever ….and you never ever know what the future may bring 💞.”

Well, that sounds like the door has at least been left open a crack for Harmony’s return! There were a lot of stories left for Harmony, especially since she threw down with Cyrus and because of her tie to a front-burner character in Willow Tait.

Who is to say that she has not retreated to Cyrus’ Washington lair? That place has been the subject of much speculation and now Jordan Ashford (Briana Nicole Henry) and Curtis Ashford (Donnell Turner) are about to do a stakeout there. Maybe they will find evidence of Harmony and her shenanigans?