The good news is that following the explosion at the Floating Rib, Lulu lived, unlike two victims who died of their injuries. The bad news is that Lulu is in a coma and docs have attached a head bonnet full of electrodes atop her beautiful blond hair; we’re pretty sure that both fashionistas Lulu and her bestie Maxie Jones (Kirsten Storms) would be horrified by the hideous looking contraption.

Lulu was last seen being wheeled out of GH to her next destination and fans are left with the hope that one day Lulu will return.

Rylan posted a pic on Instagram of Lulu after the explosion looking disheveled and dirty with the hashtag #2020.

Prior to that, she posted a short vid on Insta with all of her belongings in the background and this caption: “Entire life put in storage and hitting the road with the best partner I could ever ask for (yeah that’s you @dmoney596 ), 3 kids, 2 dogs, 2 cats, lots of face masks and no real solid life plan. 😬 What could go wrong?! 🤣😂 Help me name this trip!”

It was a sort of acknowledgment of the rumor that she had been let go from the ABC sudser. Fans were practically rioting in the streets at the thought of Rylan being summarily dismissed, and the furor continues online with fans voicing their dislike of the decision. 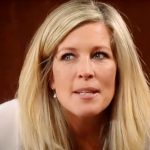 So what happens next? As we said the good news is that Lulu is still alive. Dev Corbin (Ashton Arbab) and Dustin Phillips (Mark Lawson) were killed in the explosion. Dustin was Lulu’s squeeze and he had just proposed to her when the bomb detonated.

Luckily Dante Falconeri (Dominic Zamprogna) was there to pull Lulu out of the wreckage and the horrible thing is that she might have been saved if she had been seen by a doctor sooner.

Lante fans were thrilled with Dante’s return and unhappy that it coincided with Lulu’s exit. Will Lulu be back soon? What is the possibility that the role will be recast? Already some fans are speculating Julie Marie Berman might come back to the role she had before Rylan.