General Hospital (GH) spoilers say that fans might want to get a box of Kleenex ready, because this episode is most definitely going to tug at your heart strings. That’s because Port Charles is getting ready to say to a very dear old friend and resident Sean Donely, who was on the show from 1984 to 1995. The character was played by actor John Reilly, who passed away last year. Here’s what you need to know.

According to Soap Opera Digest, Anna Devane (Finola Hughes) is the first person to find out about Sean’s death. It’s a crushing blow to her and of course, a lot of other people that were so close to him back in the day, including Robert Scorpio (Tristan Rogers). The Donely family invites many of Sean’s old pals to his funeral in Ireland, but Anna is reluctant to go because of the current situation with Harrison Chase (Josh Swickard). As many fans know, Chase has been poisoned by Peter August (Wes Ramsey), who is holding the antidote hostage in order to get Anna to do his bidding. 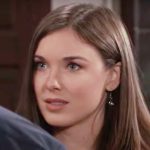 Speaking to the publication in a new interview, General Hospital Executive Producer Frank Valentini puts it this way, “The Anna and Peter story sort of lent itself to jumping off and leading into the passage of Sean Donely, and we sort of tied that in together and took a little bit of time within the current storyline to sort of reacquaint the audience with who he was and what that means. To some degree, there was a little bit of luck in terms of what was going on in the show. It made sense, given Peter’s relationship with Faison, and some of the things Sean was involved in the past, and I think it helped give context to the contribution Sean made to the show.”

Check out the new issue on sale now pic.twitter.com/hDrkmtDMOf

General Hospital spoilers say that Hamilton Finn (Michael Easton) will convince Anna to attend the memorial for Sean, and many of her other friends, they travel to Ireland to attend his funeral. New memories will definitely be made while they reminisce about old ones.