General Hospital (GH) spoilers say that for someone like Jeff Kober (Cyrus Renault) getting to work with Genie Francis (Laura Spencer) has been a dream come true. And that’s not just because she is a truly talented and beautiful woman who is also considered to be a daytime television legend in the making, but also because he gets to be on the receiving end of Laura’s on-screen ire. And now, it’s not as bad as it may sound. Here’s what he has to say.

Speaking to Soap Opera Digest in a new interview, Jeff says that he always looks forward to having scenes with the one and only Genie Francis, and for a good reason, too. Jeff says that Genie is the kind of person who really gets into her work and puts in all of her energy into her scenes, regardless of what the outcome may be. 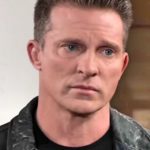 He says, “She wants to be alive and she’s like, ‘Yeah, come on! Get in my face!” The scene where she slapped me because apparently, I might have been responsible for something that happened to her daughter, and I come to her and say, ‘If there’s anything that I can do, just let me know.’ And she goes through about 20 different feelings in five second and then just hauls off and smacks me.”

Jeff goes on to say that the experience was so “rich” that he wouldn’t mind for Genie to slap him again! The actor also says that he loves the fact that his character is related to someone like Laura Spencer (Genie Francis) on the show. While Laura has made it no secret that she is rather unhappy about this revelation, Cyrus is using it to his advantage. For Jeff though, he was just as surprised about this new family connection as perhaps everyone in Port Charles was, too.

Jeff added, “I knew that Genie Francis and I had a really nice connection and I thought, ‘What are they going to do with this?’ And then it was, ‘Oh, my God, she’s my sister! I thought, ‘She is soap opera royalty!’”

Are you a fan of daytime television? Be sure to catch up on everything happening with General Hospital right now. Come back here often for all the latest General Hospital spoilers, news, and updates.