General Hospital (GH) spoilers tease the fantastic news that alum Andrea Bogart (ex-Abby) and her husband, Erik Almås, are expecting a new baby. The alum and her husband are parents to 3-year-old Emerie and expect their second child in May.

Bogart shared the news on Instagram. She posted a pic of her first baby announcement in which she and Almås are standing in front of a biplane with a child’s toy plane on the side. In a second picture, the couple is standing in front of the same aircraft, with the toy plane, but this time Emerie is posing with her parents.

The caption reads: “We sure do like adventures in our family. We’ve been truly blessed with another great one coming the end of May 2021, baby Almås will jump aboard! Our sweet little Emerie is delighted she’s going to be a BIG SISTER. It’s been a long year at home and a heck of a ride to get here. We feel the miracles of life and share our love, faith & prayers with anyone trying to get here too. 👉🏼Swipe right to join Erik and I in a chuckle—to see our first baby announcement… fresh faces, well rested and pulled together a little sharper😄 Of all the places we’ve been and adventures we’ve had, being parents is truly the most epic!”

General Hospital spoilers: An Alum is Having a Baby

Bogart debuted in Port Charles in 2010 as a stripper. She was a friend of Sam McCall’s (Kelly Monaco) and began dating Michael Corinthos (Chad Duell).

About a year and a half later Abby was tragically killed in a freak accident. Somehow a crane fell on her and of course she was no match for it.

Since leaving GH Bogart has appeared in the primetime shows Zac and Mia and Hawaii Five-O. She was also in the Lifetime movie Kidnapped By A Classmate and is a yoga instructor. 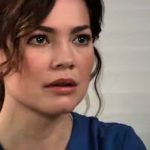 Michael Corinthos is in the midst of some heavy duty plot lines at this point in time—thoughts of strippers are far behind him. He is now a father and just annulled a starter marriage of convenience.