General Hospital Comings and Goings: Brad Is Back – Parry Shen Returns to GH

ABC General Hospital spoilers reveal the applause-worthy news that the one and only Brad Cooper, as played by Parry Shen, is back in Port Charles, NY. He returned to the airwaves today after last being seen in March prior to the coronavirus induced filming hiatus.

The role of his ex Lucas Jones has been recast with Matt Trudeau and now it looks as if these two might confront the shards of their relationship once again.

Parry Shen has brought life to the character of shape shifting Brad to the delight of GH fans. Brad is a complicated character and his many shades of gray are always entertaining. Brad was sent off to cool his jets in prison after his crimes and misdemeanors were discovered.

With the return of Britt Westbourne (Kelly Thiebaud) to town it was thought she might be able to save him from the big house but that didn’t happen. She is now back to stay in Port Charles and we can’t wait to see if The Britch and Brad reconnect and get up to their old shenanigans. 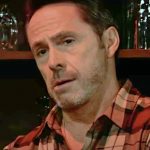 Matt Trudeau took over from the role of Lucas Jones from Ryan Carnes on Monday, November 16. 2020. Viewers were stunned with the recast as it had not been announced prior. Adding to the confusion, when the character appeared, there was no familiar voiceover telling fans that, “The part of Lucas Jones is now being played by ….”

It soon became apparent that this was indeed Lucas when he was called by name and he got in the face of his father Julian Jerome (William deVry).

General Hospital Spoilers – What Will Brad Cooper Get Up To Next In Port Charles?

Lucas was seen at the beginning of Monday’s episode after Sasha Gilmore (Sofia Mattsson) was brought to the hospital after overdosing.

Julian will be leaving Port Charles since the actor William deVry has been let go. How does this play into Lucas and possibly Brad’s storyline? We don’t have any specifics yet but we will tell you how things shake out as soon as we hear the details. In the meantime it will be interesting to see if Lucas and Julian make up before the latter takes off.