General Hospital Comings and Goings: Réal Andrews Back to Port Charles For Sweeps

General Hospital spoilers reveal the fantastic news that fan fave Réal Andrews now has a return date as Marcus Taggert. Andrews last appeared in the role on December 16, 2020 and he is expected to next be seen at the end of February. February is a sweeps month so might we expect to see Taggert back in an explosive, bombshell storyline?

The actor was temporarily replaced with Asante Jones who filled in for Andrews for several episodes. in particular this actor was in the role as Taggert was jailed after having come out of hiding, aka being dead.

Strangely enough, his family seemed more angered that he was alive than happy! They moped and mourned for months following his death. It was an extremely sad situation for his daughter Trina Robinson (Sydney Mikayla) and ex Portia Robinson (Brook Kerr) and yet they yelled at poor Taggert when they first saw him alive. Go figure. 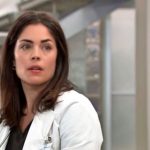 General Hospital spoilers: What is Next For Marcus Taggert?

Taggert took it in stride however, as his original intention was the safety of his family. Evil mobster Cyrus Renault (Jeff Kober) has threatened them and Taggert went into hiding in order to keep them safe. Once Trina heard that her dad was alive however, she blew the whole charade up.

As a result Marcus in in jail so no one can get at him. Let’s hope he gets a meaty storyline when he returns to the canvas. Marcus has been a fan fave for years and they were delighted when he returned to Port Charles.

General Hospital spoilers: What Will Happen During February Sweeps?

There are many ways for Taggert’s storyline to go. He could end up back with his ex Portia, and perhaps they raise Trina together? Then again, there is a spark between him and Jordan Ashford (Briana Nicole Henry). Everyone is mad at her for faking Taggert’s death but of course he is eternally grateful. They were partners long ago and they way he looks at her suggests that he has feelings for her.

At this time her husband Curtis Ashford (Donnell Turner) is very upset with her, and not sure how he feels about her lying to him about her role in Taggert’s faked death. Does this mean there is an opening in the romance department between Taggert and Jordan? Stayed tuned fans, February Sweeps is just around the corner!