General Hospital spoilers, news, and updates tease that Sebastian Roché, who played the role of Jerry Jacks, has joined the cast of 1923. The actor has landed a recurring spot on Taylor Sheridan’s Yellowstone prequel spinoff.

Details regarding Roché’s character remain under wraps. Production of the prequel spinoff is currently underway in Montana, and it’s expected to go on air this coming December. Harrison Ford and Helen Mirren take on the lead roles.

The new Paramount + series will focus on a new generation of Duttons. It will explore significant events during the early 20th century, particularly the historical droughts, and pandemics, as well as the end of the Prohibition and the Great Depression.

Meanwhile, Yellowstone, which stars Kevin Costner as John Dutton, is set to premiere its fifth season on November 13. 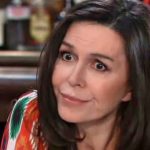 However, Jordan managed to connect the dots and learn that Trina’s biological father is no other than Curtis Ashford (Donnell Turner). But she still remains tight-lipped about what she knows. As for Stella, Curtis and Portia Robinson (Brook Kerr) will ask her a huge favor. The couple may ask her to officiate or perhaps help plan their wedding.

Tension Rise Between Marshall and Sonny

As for Sonny Corinthos (Maurice Benard), Marshall Ashford (Robert Gossett) may try to throw him away during Trina’s celebration. The tension between the two will start to rise, but Curtis will call for peach because it’s Trina’s big day.

Elsewhere, Cameron Webber (William Lipton) will keep Josslyn Jacks (Eden McCoy) on edge as he continues to talk about the secrets she’s hiding. But their conversation will turn lighter later on as he divulges a secret of his own. Josslyn will be surprised when she learns that Cameron will perform a song for Trina.

Meanwhile, Spencer Cassadine (Nicholas Chavez) wants to talk to Trina about something important. The latter managed to take his letter and threatened to read it herself if he didn’t tell her what was inside. Spencer will be forced to confess, but he gets interrupted before he can tell Trina about his true feelings.